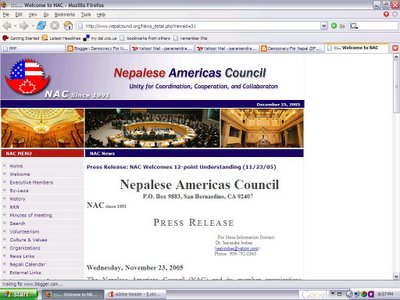 I hope the NAC will similarly come forth condemning the regime's concerted attempts to thwart the mass rallies by the seven party coalition, especially the UML and the Nepali Congress, in different parts of the country. We have to condemn it in such a way that we tie this latest episode to the prior attacks on the media and the NGOs. These fascist tendencies have to be countered forcefully now, or they will learn to get worse.

Also I hope the NAC will play a role in fundraising at this end.

Fundraising Among Nepalis In The US: Pyramid Of 10

Political power has three components to it: money, message and organization.

The message is democracy, although I wish the seven parties offered a greater clarity on the agenda and the roadmap. The organizations are securely in place at both ends. Now let's work the money part. $100 is a small sum. 1000 individuals is a reasonable head count. And the organizational framework is not a pyramid really, it is a cloud. Everything stays transparent at all times. As a starter we build a pyramid of people who at this stage only pledge. We collect the money as per the demand of the movement down the line.

Some money is needed right away for this: Movement Taken To Online Video.