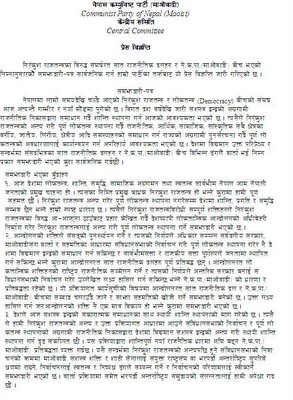 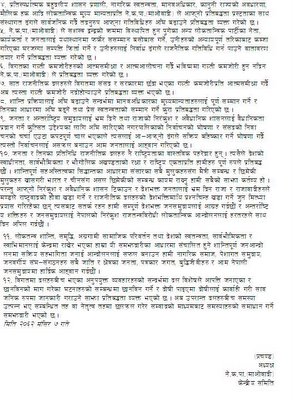 2. The agitating seven political parties are fully committed to the plan to reinstate parliament whose decision will lead to the formation of an all-party government, hold talks with the Maoists and go for an election to a constituent assembly. They identify this as the way to end the present conflict and restore sovereignty to the people. The Communist Party of Nepal (Maoist) has made the commitment to organise a national political convention of democratic forces. The meet should decide on the formation of an interim government and hold elections for a constituent assembly to achieve the agreed goal. The seven political parties and the CPN (Maoist) will engage in dialogue and explore a consensus on procedural matters. It has been agreed that People’s power is the only alternative to meet the goals.

3. The country wants a positive solution and a permanent peace. That is why we are committed to these goals and an end to the armed conflict through the end of autocratic monarchy, elections for the constituent assembly and the establishment of absolute democracy. The CPN (Maoist) expresses its commitment to move ahead in a peaceful new political current through this process. There has been an understanding on keeping the Maoists’ armed forces and the Royal Nepali Army under the supervision of the United Nations during the elections of the constituent assembly, conduct elections in free and fair manner, and accept the results of the elections—all these after an end of the autocratic monarchy. We also expect the involvement of reliable international interlocutors in our dialogue process.

4. The CPN (Maoist) makes public its commitment to clearly institutionalise the values of competitive multiparty system, civil and fundamental rights, human rights and the rule of the law.

5. The CPN (Maoist) has made the commitment to let the leaders, activists, and the people who were displaced during the armed conflict to be resettled in their homes. It has also committed that all land, houses and property seized unjustly will be returned. This will create an environment where people will be allowed to freely conduct their political activities.

6. Through self-criticism and self-evaluation of the past mistakes and shortcomings, the CPN (Maoist) is committed not to repeat those mistakes.

7. The seven political parties have realised they made mistakes when they were in parliament and in government and have committed that they will not repeat those mistakes.

8. Human rights and press freedom will be respected while moving the peace process ahead.

9. The talk of municipal elections and parliamentary polls is to trick the people and the international community and to legitimise the illegitimate and autocratic rule of the king. We will boycott these polls in our separate ways and urge the people to make such elections unsuccessful.

10. The people and their representative political parties are the real guards of nationalism. We are fully committed on the self-reliance, sovereignty, territorial integrity and national unity. It is our common duty to have friendly relations on the basis of the principle of peaceful co-existence with all the countries of the world, especially with our neighbours India and China. We urge all patriotic people to remain alert about Mandale nationalism that the king and the monarchists are preaching to the people. We also appeal to international powers to support the democratic movement against autocratic monarchy through all possible ways.

11. We urge civil society, professionals, people of all caste, communities and areas, the media, intellectuals and general Nepalis to actively participate in the people’s movement that will be conducted on the basis of our agreement that has democracy, peace, prosperity, progressive social change, freedom, sovereignty and integrity of the country as the cornerstone.

12. Past misbehaviour of the parties will be investigated, and action taken against those found guilty and the findings made public. Any problems arising will be sorted out at the concerned level or through discussion at the leadership level.

Some problems that I see:

(2) The seven parties are still insisting on House revival. The Maoists want to go straight to an interim government.

(3) Putting the state army and the Maoist army under UN supervision and then going to a constituent assembly: that is not an option. The Maoists either have to disarm under UN supervision. Or they have to be partly integrated into the state army. There has to be only one standing army in the country before the country can go into a constituent assembly. This point is a non-starter. This is no agreement.

BBC: "Former prime minister Girija Prasad Koirala said the deal would come into effect once the rebels gave up arms."

Apparently Girija has not been handed a copy of the agreement.

I have seen Maoist statements before where they have said they are willing to disarm before going into a constituent assembly. In this agreement they have backtracked. It is possible they are using that as a bargaining chip. If the seven parties will stick to the unreasonable idea of House revival, they are also going to talk a little unreasonable.

Looks like the overhyped meetings between the Maoists and the parties have not brought forth much that can be said to be new and groundbreaking.

(7) The parties say they are going to engage in self-criticism for the 12 years of half-baked democracy. I look forward to it. What do they think were the mistakes made?

Overall, I don't think this agreement is a major breakthrough. But it is better than nothing. I am glad finally they are talking.