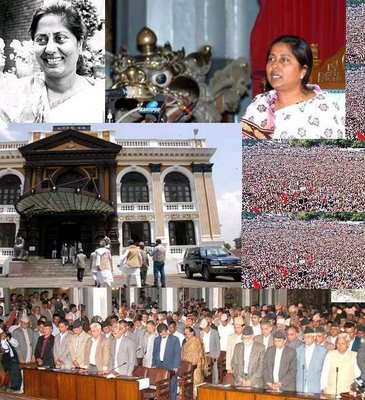 Chitra Lekha Yadav was good enough to be Speaker during the long months of the democracy movement, but not after. That was wrong. Now is the time to make up for it. I am glad a Janajati person served, but now is the time of the backward caste Terai woman.

Everything else was decided by the House on consensus. But a vote was threatened on the Speaker issue. That was wrong. Let's make up for it now.

I am alarmed with reports the king has become politically active again. He has been busy holding meetings. The guy does not get it, does he?

The choice during the constituent assembly was to be between a strictly ceremonial monarch and a republic. But this guy does not get the concept. He does not seem to understand he may not hold political meetings.

If he tries to influence the election in any way at all, he should be shown the door right away. The interim parliament may declare the country a republic through eight party consensus.

The people should not have to struggle with the monarchy question during the elections to the constituent assembly. If we declare the country a republic right away, that will be good. Otherwise the monachy as an issue will be a diversion to the real issues of the people, primarily to do with state restructuring.

Girija is almost always the last to come to the table. Look at the republic question. The people are ahead of his cadres and leaders. And he is behind them all.

The Congress acted like it were two parties for much of the 1990s. That is nobody's fault. When the largest party is too much larger than the second largest party, part of it becomes its own opposition.

So I do not see the two factions coming together. Actually the whole farcical unification talk by Girija might be his way to make sure Deuba does not spend too much time expanding his organization on the ground.

It is not a given that the Nepali Congress will stay larger than its rival faction. If the Congress (D) can take the lead on the idea of a federal republic, it might grow fast. Even a party like the Nepali Congress perhaps has 100,000 members in a country of 27 million. That is a drop in the ocean. Voter loyalty can shift fast.

Congress (I) used to rule in Bihar. And then it got pretty much wiped out.

The UML would have been in a much better position, but I don't think it is capable of shedding its overwhelmingly Bahun composition at the top.

What Shape The Constituent Assembly

205 seats by direct elections, and roughly another 200 through proportional representation.

On the other hand, the Congress, UML and the Congress (D) could always gang up and show the Maoists they do not have the numbers. That polarization might rob the Maoists of the presidency, but that will give them a huge boost for the subsequent parliamentary and presidential elections.

That is extremely possible. A scenario where the two Congress factions do not unite, and where the Maoists send a whole bunch of women and ethnics into the interim parliament is like a Space Shuttle about to take off. I am surprised though that they are ceding ground to the Congress parties and to the UML in the Terai. What about Madhesi representation?

Maybe their strategy is to consolidate parts of the country where they are strong. They are not seeking to expand right away, and hence the Madhesi blindspot. If I were the Maoists, I would not write off the Terai so easily.

I guess I like the idea of seeing a Janajati president. The heck with the Bahuns.

Tackling Bahunbaad
Prachanda's Shiva Sena
If Congress Does Not Go For Republic, Left Front Will Win
Why Prachanda Wants Girija To Lead The Interim Government

India ready to assist Nepal’s effort to peace, democracy and development: Menon NepalNews
Koirala, Prachanda ask their student unions to stop muscle-flexing
House probe committee finds NA Colonel guilty of killing a UML MP
Moriarty says Maoists not committed to agreement
Senior official reveals India has proposed Comprehensive Economic Agreement
Senior Maoist leaders call for 'broader republican front'
Conspiracies on to hamper CA polls: UML general Secy. big willful bank defaulters are being protected by political leaders and high level judicial officials. ..... governor of Nepal Rastra Bank Bijay Nath Bhattarai complained on the lack of support by the government and the court to take actions against the willful defaulters
World HIV/AIDS Day: Voices of people with HIV/AIDS remained unheard
Judges to get security
No let up in Maoist excesses: Report A group of local landowners, supported by Maoist cadres at Bankatiya of Banke Wednesday looted paddy from around 150 farmers of the district .... In Ilam, Maoists continue to collect "donations" from teachers of several schools in the district.
HoR can declare Nepal a republic: Speaker Nemwang Speaker of the House of Representatives (HoR), Subash Chandra Nemwang has said that the HoR can declare the state a republic if the eight political parties wish so ..... the current House of Representatives, which is revolutionary in nature, can announce establishment of a republican set up Attack on SC justice Giri Gupta said he had lost a case in the Supreme Court regarding a dispute with a tenant and wanted to pressure the judges to resign.

Anonymous said…
Paramendra Jee,
Let us hold on for time being for interim speakership to Chitralekha Yadav. Yeah, I agree that she deserves it on two counts; being a lady and being a backward Terain. However, having Janajati is also not a bad issue. Especially in view of strong line up of Bahun leaders in UML, it is better to allow Mr. Nemwang to grow in stature so that Bahunbaad of UML can be checkmated in time.
9:24 AM

Anonymous said…
Have you seen the new India search engine www.ByIndia.com they added all the cool features of popular products like MySpace, YouTube, Ebay, Craigslist, etc. all for free to use and specifically for India. Anyone else try this yet?