A Question For Mahara 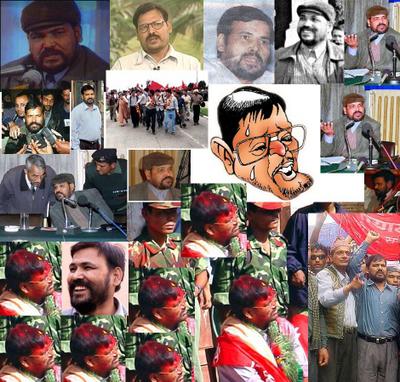 100,000 Unarmed Maoist Cadres
The Maoists Could Do More

Over five-dozen Maoists have surrendered before the district administrations of Gulmi and Jumla districts.

According to state-owned Radio Nepal, 60 Maoists including the heads of the self-styled ‘ward people’s governments’ on Sunday. Some of the surrendered persons are members of the militia force the rebel outfit.

The insurgents have abducted over 100 civilians from the far-western districts of Bajura and Doti districts, according to the army.

The rebels, army said, have in the last few days marched at least 61 villagers from Kuldebmandu area of Bajura and four each persons from all nine wards of Gajari VDC in Doti district. The whereabouts of the abducted villagers remain unknown.

Maoists refute allegations of extortion, abduction NepalNews .... Krishna Bahadur Mahara said that the entire rank and file of the party were engaged in political and activities aimed at serving people as per the spirit of the ceasefire. He said it was not the policy of his party to `abduct’ teachers and students and that such reports were nothing but the ‘planned propaganda’ of the royal regime...... Mahara has also alleged the security forces of taking into custody their six unarmed cadres at Bahadurpur of Palpa district in western Nepal and executing them last week (Sep. 24). The Royal Nepalese Army, however, said the Maoist cadres were killed in two-way clashes after the security personnel opened fire in self-defense after they were attacked.

So, Mr. Mahara, what is the truth here?

There's a news piece where you claim the Maoists are not engagd in activities that could be called abductions. The news of Maoists surrendering is not big news. The RNA is known to have 200-300 defections a month.

But there are specific cases of abductions identified here: "....in the last few days marched at least 61 villagers from Kuldebmandu area of Bajura and four each persons from all nine wards of Gajari VDC in Doti..."

That is quite specific, don't you think? So is this true, or is this not true? Is it possible that some of your cadres at the grassroots level have not heard the news of the ceasefire? Or are deliberately disobeying? Is this a case of inefficiency? Are these isolated incidences? Does your party do internal fact finding? What's going on?

If the RNA is not telling the truth, your party needs to offer rebuttals in as great a detail.

Nice to know Bijay Kumar is back. He apparently has a show called Frontline with Kantipur TV. Too bad his shows are not archived online as was the case with Dishanirdesh.

Dear Parmendra Ji !
This is Anil Kumar Jha. I am Joint General Secretary of NSP-A. Our General Secretary Sri Rajendra Mahto ji had given your e-mail address. I am starting for USA from Kathmandu on 13th October and firstly I will be there in Boston then DC then and lastly on 26th October we will be free for any where to go as we want. I want to come on 26th in NYC. As u know we r on road's it is not possible for mine to be in NYC for long time on my own expance, but I want's to make this trip useful.Can u suggest me how is it possible ?
Anil Kumar Jha
Tulsi Giri And Reconciliation

It is uncharacteristic of Giri to tone down. But he does not exactly sound reconciliatory.

“I think the problem (with parties) is medical level. So it could be treated easily. I don’t think it needs surgical attention.”

This false nationalism of the Mandales really ticks me off. That is only one step away from virulent anti-Madhesi prejudice.

Could the seven parties take up on this offer and seek an all-party government promulgated through Article 127?

The seven parties have not been doing the homework. Girija's puppy love with the 1999 parliament might never go away. The parties have not committed themselves to federalism yet. Where is the anti-corruption plank?

The parties also will have to think through the endgame. What will it be like?

On the other hand, considering the Constituent Assembly has become the meeting ground for the seven parties and the Maoists, will the seven parties leave some room for the king? In that, if he will use Article 127 to form an all-party government that will hold peace talks with the Maoists whose outcome is already known, is that acceptable?

If the goal is elections to a Constituent Assembly, does it matter if we go there through a ton of possible bloodshed, or we go there because the king forms an all-party government using Article 127?

If the king talks unreasonable, he loses politically, and that fuels the movement further.

I think what the king is saying is he is willing to use Article 127 to form an all-party government, but that he does not see how he could use it to revive the House.

That is what the all-party government will do, so does it really matter if that all-party government will be formed through a bloody revolution or through a royal use of Article 127? Personally I prefer the Article 127 option. Revolutions are weapons of last resort. I am the only democrat who has been espousing an unilateral declaration of an interim government. But that is a big leap. You got to get huge numbers of people into the streets. And then you got to get the foreign powers to come along, a big if.

Article 127 is the much better option.

What do I think of Article 127? I think it should no longer exist. It should have been like an appendix, never used. On the other hand, to give the king the benefit of doubt, if a state bordering on a total collapse is not an emergency, what is? How he used it is a whole another topic. And he looks even worse in that department.

I think it is a question of emotion and logic. Some of Girija's arguments have been "He should listen to me because I am older than him." And similar. What kind of logic is that?

There is nothing in the 1990 constitution - a constitution that I think is disgusting - that allows the king to revive the House. But Article 127 can be used to form an all-party government. That government would include the seven parties to start with. And once it is formed, it already has a clear roadmap.

I think the seven party coalition should consider this option.

Especially since they have exhibited an inability to come up with a forward looking political platform, this option looks even more attractive.

The biggest reason the parties should go for it is because it leads to elections to a constituent assembly.

I think the king is confident that if free and fair elections are held, the people will retain the monarchy. And I agree with that reading of the situation. At the end of 2004, more than 60% of Nepalis were for a constitutional monarchy and more than 20% were for an executive monarchy. I think the monarchy has done itself some major damage since. But the people might bounce back on the monarchy if the king were to speed up peace and democracy by forming an all-party government through Article 127.

At that point all parties in the parliament should have met, and then agreed on a candidate. Going just by size, it would have been Madhav Nepal. A Nepali Congress vertically split is no longer the largest party. But if instead they went by seniority, which is bizarre and undemocratic - Girija ends up looking like a high school bulley - and they instead opt for Girija, that would be their democratic right to do so.

The 1999 House has been dissolved. It can not be revived. But an all-party government can be formed using Article 127.

When you look at these details, Girija looks like a major league villain.

First, he has this really idiotic stance that the 1999 House has to be revived. Revive how? Because there is a provision in the constitution called because-Girija-says-so?

Second, he wants to be the Prime Minister of the all-party government even though his party is no longer the largest. Because-Girija-is-Girija.

The first is unconstitutional, and the second is undemocratic. The 1999 House can not be revived. And Madhav Nepal should be Prime Minister of the all-party government. Girija can not be, should not be. When Girija becomes Prime Minister, he gets lost, he needs a democracy movement to stay relevant, he has that Arafat problem.

Let's face it, the days of the Nepali Congress being the largest political party in Nepal are permanently over.

But then, at this point, there is no formal offer from the king that he is willing to use Article 127 in this way. So the ball is still in his court. I think the king should give the parties a second chance for the sake of peace. The country has already gone through plenty of pain.

And this time the parties should take it, and get the ball rolling.

Then we can look back and say it took a 2/1 for the Congress and the UML to come for a constituent assembly!