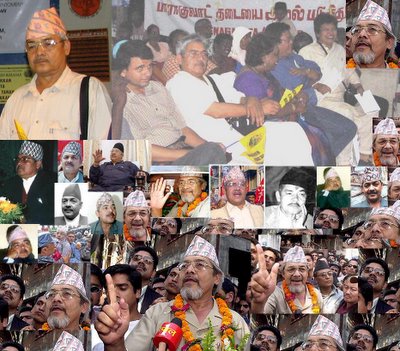 I got to talk to Bamdev Gautam a few hours back for the first time. He said he was on his way to the bathroom for a bath, but he made time anyway. He was generous with his time.

He has an obvious political presence. He is articulate, he is fearless, he is staunch. He has been controversial in the past, like when he told the Russian ambassador in Delhi he was going to bury any and all in the same ditch. That was ages ago. And of course he split the UML at one point. That is past, and now the two are reunited and stronger than ever before.

I am so impressed with the UML right now. They seem to have this amazing ability to bring people out in large numbers. Political activists and leaders in America would envy these UML stalwarts. When someone brings 100,000 people to Washington DC, that is news for months, sometimes years.

The UML is a cadre-based party, and the democrat in me greatly admires that. And I like their practice of internal democracy. They will debate issues endlessly before some body like the central committee comes to a decision. I wish the Nepali Congress had that kind of a culture at the central level.

And of course I am settled on the Madhav Nepal name for Interim Prime Minister. It is a simple democratic arithmetic on my part. A Nepali Congress that has been vertically split is no longer the largest party in the country. And the UML sure has the momentum. And they are also best positioned to make sure the worst fears about the Maoists do not come true.

Basically we talked about January 20. He said the Maoists have never infiltrated any rally, and they will not do it on January 20. And if the king and the army were to send RNA people to pose as Maoists, they will get exposed by the people. And that the rally will be in Durbar Marg, not in Baneshwar. The most restricted space is to be invaded.

He said the goal was to disrupt the February 8 polls. Toppling the regime was not an immediate goal.

He said it was not true Madhav Nepal said in Janakpur that the monarchy will come to an end in February.

I thanked him and his party for the clarity they have offered with their two words: democratic republic. And I thanked him for the huge UML rallies over the past so many weeks.

And then I went online to look for photos of Bamdev Gautam and found an interesting one where Shambhu Thapa and Gautam are in the same shot. I thought that was greatly interesting because these two remind me of each other. Both will be crucial to the success of this movement for a democratic republic.

January 17, 2006 (7 minutes) I was on the phone with Bamdev Gautam. You can hear my voice, but not his though. I have not had the equipment. It is not like I did not visit the local Radio Shack. They did not have it either. Gautam said the January 20 protest rally will go on.

January 17, 2006 (8 minutes) My message to the Nashville gathering through Shyam Karki. Please donate $1500 for the pamphleteering project. The idea is to reach all wadas in the country.

Govt’s claims are baseless: Prachanda NepalNews ..... Prachanda, has dismissed government’s claim that the CPN Maoist guerrillas are planning to infiltrate Friday’s mass meeting being organized by the seven party opposition alliance...... has expressed commitment that his party will not indulge in activities including use of force, infiltration or any other provocative activities during Friday’s mass meet organized by the seven party opposition alliance...... The Maoist supremo has also termed the government’s ban on all type of meetings and rallies in the capital as “defeated mentality” of the government.....Prachanda’s statement has come hours after Home Minister Kamal Thapa claimed that the government had credible evidence that the Maoists were going to `infiltrate’ on Friday’s mass meeting..... Ian Martin, regretted the government’s decision to impose ban on peaceful assembly in Kathmandu and also sought clarification from the government in this regard. Govt. bars civil servants from taking leave till municipal polls "Of course, no civil servants and their family members want to take part in the conflict-prone municipal polls but the government is trying to force us. We have either to quit the job or obey the circular. We have been victimized," the report quoted a government official as saying.