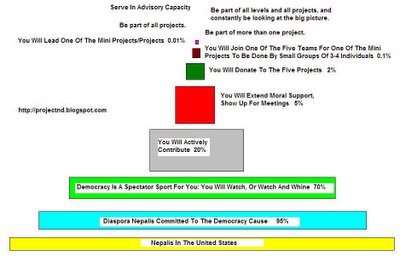 I have been trying to create a group dynamics model that throws light on the commendable work on behalf of the democracy movement being done by the Nepali diaspora in the US. Here in the diagram is my latest attempt. One important addition has been the section at the top for the advisors. There are many well accomplished Nepalis who can not see themselves with one of the projects, because all that would be too hands on for them, and they are often holding various leadership positions in the various Nepali social organizations on the continent, and these might be people who will happily donate $1000 or more because they are in the top income brackets, but their contribution can not be measured in the number of hours they might have to give. They would be kind of like the Board of Advisors if this movement and projects to do with it were a company.

Diaspora Dynamics
The Cloud Model, Not The Pyramid Model

On the other hand, I do feel there is this urgent need to expand the involvement base. What about those tens of thousands of Nepalis who are also in the country? I think many of those could pose for group pictures to express their solidarity: Flickr Tag: NepalDemocracy. And they could each donate $10.

I believe the top and the bottom have been missing in all my earlier models. I have been too focused on the immediate. So let's close in from both ends.

I think it is so much easier to get along and stay focused and productive as long as we keep focused on the intended recipient of our work: the 27 million people in Nepal. It is not about us, it is about them.

This is also of career interest to me. I have been working within the Democratic Party in a so-far small capacity to present Nepal as the Iraq for the Democrats. There is a neocon way to spread democracy, and then there is a progressive way. The model we could develop for Nepal could be replicated elsewhere in the world. Suddenly the immigrants in America from all these poor countries become small scale heroes in America, as opposed to being people who are quick subjects of demonizations and scorn from the mainstream, sometimes subject to racial harassments and more. They get to transform and become the soldiers on the cutting edge for democracy. From being nobodies working little jobs, they become freedom fighters, part time. That would contribute to their sense of self worth, don't you think?

If we can become more organized and more effective than we are, we can also hope to get substantial logistical support from the private sector, as well as the public sector. We could be talking big bucks. Money helps. We could do more for the democracy movement in Nepal with more money.

I have constantly tried to come up with a model that will allow every interested individual and organization to contribute to the max. I think the latest model is close to it, and it builds on the earlier models.

My style is to suggest all of us should go public with our names and stay public with our names. If we can not show up in the streets of Nepal, that is the least we could do. But I am understanding of those who might choose to put in the work and the money, but keep their names private.

Earlier, much earlier I have talked of 5 Steps To Democracy.

Two layers could be added to that model.
The movement for democracy in Nepal could have impacts for the 2006 and 2008 elections in the US.